This week we thought we would take some time to reflect on the Fear, Uncertainty and Doubt (FUD) surrounding bitcoin and its network. These stories and FUD only really seem to rear their head every few years or so when bitcoin is in the spotlight and regulators are anxious. Otherwise, it’s usually just pronounced “dead”, like it has been 420 times in the past by mainstream media.

We have picked some of the most common problems or misconceptions usually attributed to Bitcoins failure. We will divide the articles into a part one and part two to explore them in-depth and hopefully address the perceived failures comprehensively.

Bitcoin is for criminals

One of the most common and cited reasons as to why bitcoin shouldn’t be used or adopted is that it is primarily used by criminals. Even as recently as this year, we have seen people like Janet Yellen stating, “I think many (cryptocurrencies) are used, at least in a transaction sense, mainly for illicit financing. And I think we really need to examine ways in which we can curtail their use, and make sure that anti-money laundering (sic) doesn’t occur through those channels.”

Firstly, we need to recognise that every form of currency is used to some extent for illicit purposes. According to the UN’s Office on Drugs and Crime, it is estimated that the amount of money laundered per year worldwide is equivalent to between 2-5% of global GDP or $800 billion – $2 trillion. A significant nominal value. But how does it compare to Bitcoin?

Luckily bitcoin and its ledger are an immutable, transparent record that maintains a full story of every activity that has taken place on top of the network. Companies have emerged that specialise in tracking and monitoring these transactions; they offer insight and help us understand each transaction’s origin and purpose. They can therefore help us dispel some misconceptions when it comes to the statement that “bitcoin is for criminals”.

Chainanalysis, the leading blockchain analytics company, produces an annual report that tracks the use of cryptocurrencies in illicit transactions; it is widely considered the most comprehensive and most accurate analysis conducted. Their 2019 report concluded that around 2.1% ($21.4 billion) of all crypto transactions (not just bitcoin) were related to criminal activity. In 2020 that fell to 0.34%, or a total of $10 billion. Even if you had to double, triple or even quintuple the nominal amount, it would still be less than the lower bound estimate of fiat currency used for illicit activities.

The ability to track every single transaction on the Bitcoin Network makes it a less than ideal solution for people who want to remain completely anonymous. When you combine that with the stricter KYC/AML policies that fiat on-ramps or exchanges like Coinbase or Binance are employing, it becomes even harder to transact on blockchain networks anonymously. We can conclude that while all currencies are used for illicit purposes to some extent, the mantra of “bitcoin is for criminals” doesn’t hold up.

Bitcoin is backed by nothing/has no intrinsic value

Bitcoin was designed as a peer to peer form of electronic cash. It, therefore, isn’t backed by the promise of governments or central banks. The network cannot be controlled or manipulated to serve the needs of a few people or individual countries. But why does bitcoin have value? Well, to answer this, we first need to ask why does anything have value? Value is subjective; therefore, everything can have some value. The more people that agree on something having value, the more valuable it is. This value usually relates to how scarce or useful it is to any individual.

Let’s take government or fiat money as an example. Currently, the US Dollar is the worlds most trusted and useful currency and therefore has assumed the role of the global reserve. Yet, at the end of the day, every US Dollar is nothing more than a promissory note or debt backed by the central bank. The dollar has value because we trust the fact that the US government will protect the central bank who, in theory, should pay back that debt at some point in the future. Other than this promise and its enforcement through violence, there is nothing backing the dollar.

Bitcoin itself is also backed by trust. However, this trust isn’t derived through the promise of government but rather mathematics, computer science and capital. We can trust bitcoin to operate the way it was designed because the code it runs on is open for the world to see and verify. This code is also run by people who have invested billions of dollars into the necessary infrastructure and borne the operating costs required to support and secure the network. Through a combination of computer science and economic game theory, we can create a safe and secure store of value, medium of exchange and unit of account. If you consider its codified issuance or inflation schedule, you begin to see it as potentially the worlds hardest form of money that any single party cannot influence. Therefore it is up to the holder to decide whether there is any value in a non-discretionary, apolitical form of money in the world at the moment.

Yes, anyone can copy the Bitcoin code. It is open-source software that anyone in the world can copy and start running on their computers. Some have even tried to change the core code of bitcoin and convince the community to follow which results in what they call a “fork”. This is why we have coins like Bitcoin Cash, Bitcoin SV or Bitcoin Gold today. All very similar to bitcoin but they are not Bitcoin. There are many other cryptocurrencies that have used a large part of the bitcoin code, and there will be countless others in the future. 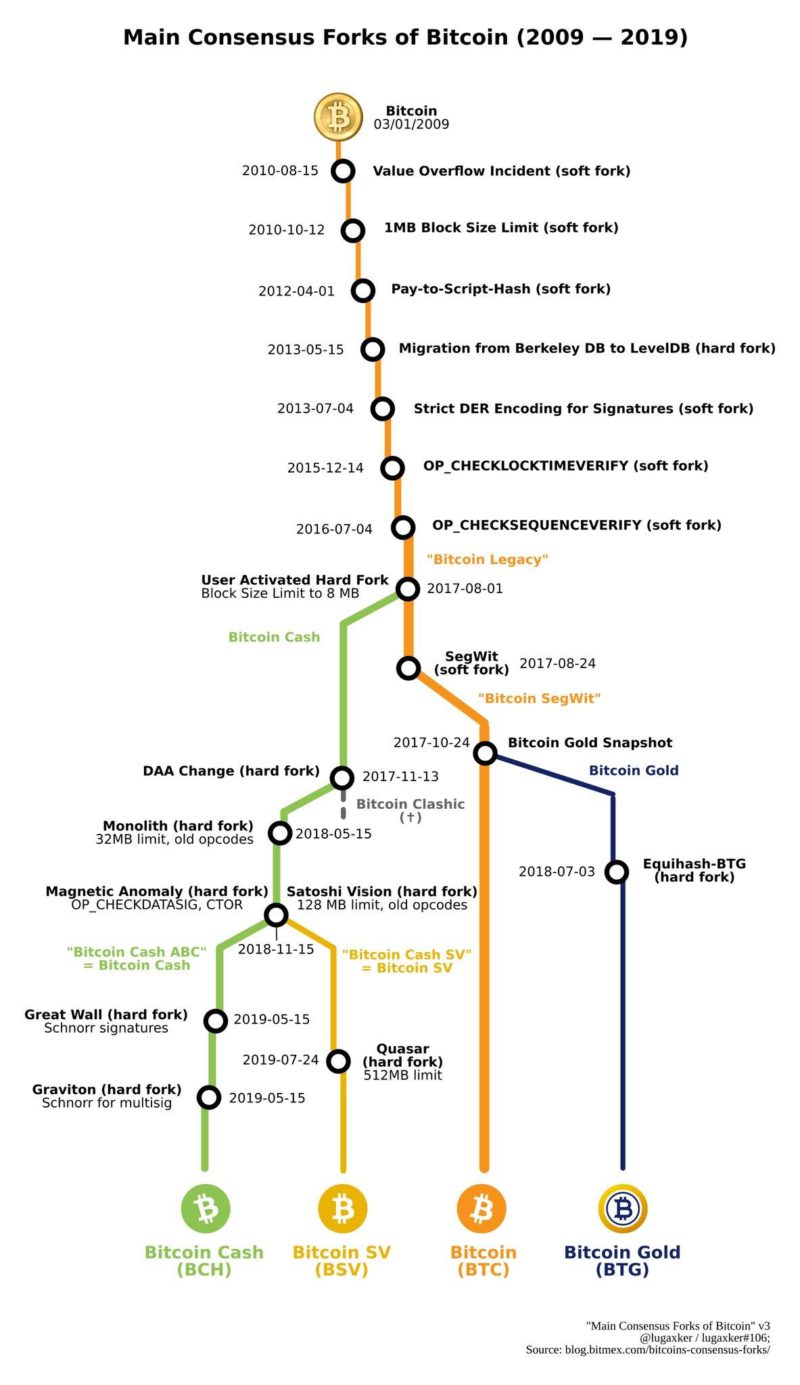 However, what they can’t copy are Bitcoin’s network effects. These network effects are part of what gives Bitcoin its value and are extremely hard to replicate. The investment in infrastructure that has already gone into protecting the network and developing bitcoin further has reacher into the billions, and it doesn’t seem to be slowing down anytime soon. This infrastructure, brand name and traction amongst users gives it a moat. It is akin to copying the Facebook code, starting to run your own Facebook and expecting everyone to port over and begin using the new software instead. It would be almost impossible to find any traction to the level Facebook already have. These network effects have helped companies like Amazon, Facebook, and Google become as successful as they have been. This remains true for bitcoin as well; for every additional user that joins the network, the more utility and benefit all other users will derive.

Bitcoin is too volatile to be an actual currency

Almost no one alive today has witnessed the rise of a market selected form of money. The currency money we use globally is called fiat money. The word fiat, translated directly from Latin, means ‘let it be done’. This is how our money comes into existence today. A government decides that this paper (or the digital version we use more often nowadays) has value and can be traded for good and services within their country, and they enforce its use by making us pay our taxes in it.

Market selected forms of money, however, go through a very different process. They emerge over time through trials and tribulations. If we look back at history, there are four distinct phases market selected money goes through: collectible, store of value, medium of exchange, and finally a unit of account. 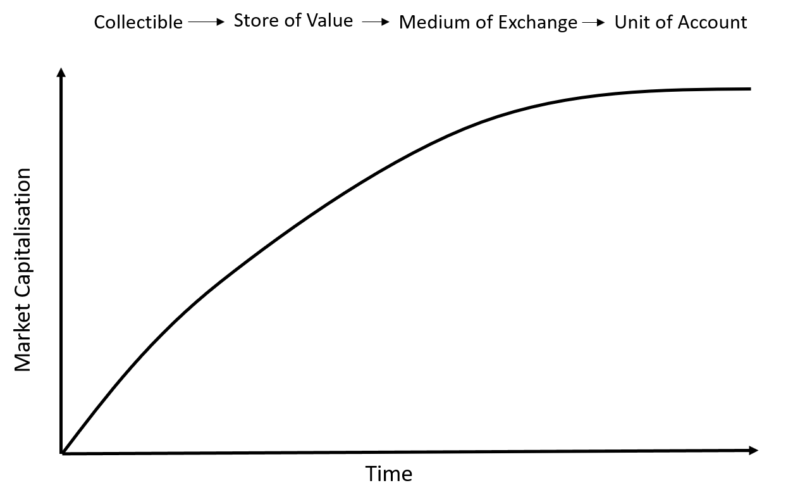 At each stage, this money will experience different problems it must overcome. Most monies in history have failed because their perceived rarity or scarcity was, in fact, incorrect. Bitcoin differs in this because there is a codified issuance schedule, our assumptions around how much will exist will hold true. Yet, this is only one of the obstacles it will face.

Bitcoin is currently transitioning between a store of value and a medium of exchange. It is undeniable that people have started choosing to store their wealth in bitcoin; it has a market capitalisation of over $700 billion. We can also see that people have started to use it as a medium of exchange, with countries like El Salvador even making it legal tender. Volatility is a natural part of the rise of a market selected form of money. We have seen its volatility reducing year on year already, and we don’t expect the trend to stop. However, for those who embrace it, volatility rewards those who managed to identify it as a possible form of money before becoming a widely accepted one.